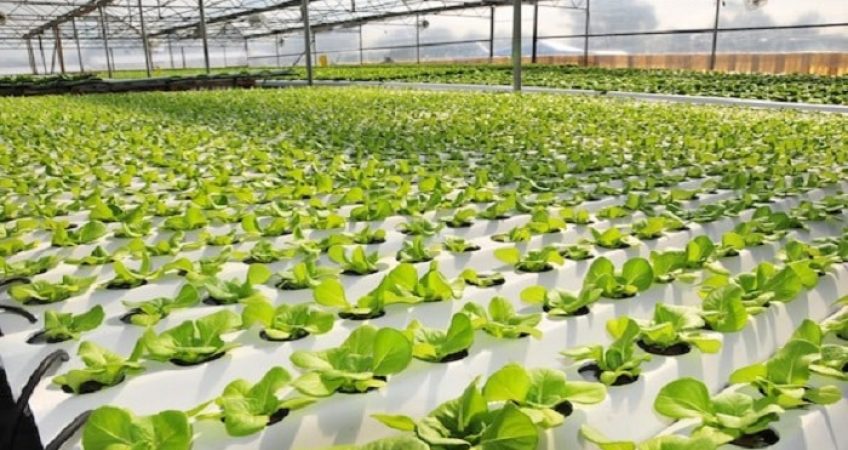 Posted by hudsonbay In Blog

Hydroponics: An Overview and perspective

Hydroponics is a soilless way of cultivating crops i.e. means of method of growing plants without using soil as source of plant nutrient or anchorage. Anchorage and roots development are provided to the plants in inert growth medium such as sand, gravel, water, coco peat, rockwool, or clay pellets etc., and plant nutrients are supplied directly to the roots system from a flowing nutrient solution whereby, unabsorbed water by the plant root system would be recycled for later usage.

Leafly (2017) reported that history has it that the Hanging Gardens of Babylon around 600 BC were grown using hydroponics. It was also reported that Aztecs used a form of hydroponic system of farming when they started farming on Lake Tenochtitlan in the 10th and 11th centuries.

Several technological advancements have been made to improve light provision, plant nutrient delivery, and micro-climate control to further enhance plant productivity and performance. Scientifically, hydroponics became very vital in the quest to study the fundamental nutrient requirements of plants and the ways in which plants make use of these nutrient elements.

The special feature of hydroponics is complete elimination for the need for soil and its micro-organism in the survival of plant and the controlled nutrient delivery to plants. This has given rise to better crop quality, higher growth rates, elimination of weed control requirements and much healthier plant produce. Hydroponics allows for plant cultivation in a sterile environment that reduces to high extent the need for pesticides, herbicides, fungicides, and pesticides thereby elimination of residual effects on the soil. Also labourers are not exposed to toxic chemicals, and labour costs are reduced. Additionally, hydroponically produced plants are found to be free of all forms of EPA’s priority chemical pollutants.

There exist different forms of hydroponic systems. Systems are identified based on the way plants are supplied with nutrient solutions. However, all these systems must only have three main components viz plant nutrients, oxygen and water. Below are some of the most common forms of hydroponic techniques practiced around the globe.

This is the most common form of hydroponic system. In this system, plants are placed in a separate growing containers or polystyrene raft and each suspended in a growing water baths where nutrient rich solution is introduced through the holes on the growing containers or polystyrene raft in water bath at the depth of 8-30cm (Figure 1). The water bath is made from non-toxic plastic or liner such as low density polyethylene (LDPE). The nutrient solution is vigorously aerated to maximize nutrient uptake by the plants. 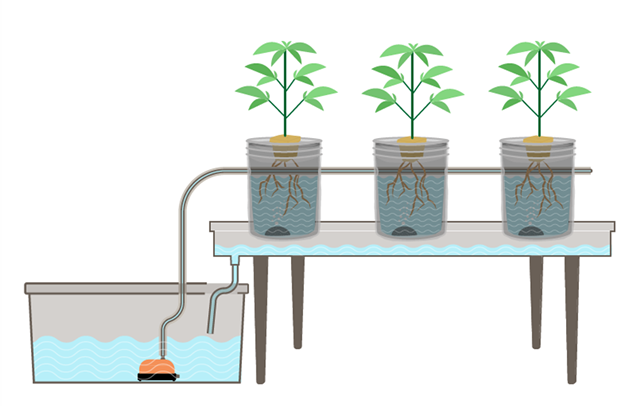 This system the most widely used in large scale vegetable hydroponics cultivation around the world. A thin layer of nutrient rich solution is passed through slightly inclined customized trough or closed gutter from a reservoir tank and made to recirculate through a collection tank (Figure 2). Holes are cut into the trough and plants are positioned using a small media filled plastic mesh pots. Plant nutrient rich solution is usually pumped at intervals of 20-30 min with breaks of 4-5 minutes during day time and stopped overnight. On the other hand, the setup could be placed such that the upper part of the plant roots remain suspended in the air while the lower part is submerged in well aerated flowing nutrient solution. This strategy allows roots to get oxygen from liquid media and from the air.

NFT has the potential to be expanded easily by adding more holes on the planting trough to accommodate more plants, or just putting in more planting troughs. This gives the opportunity to easily increase production capacity or potential in as much as the reservoir and pump can handle the extra load.

However, if nutrient solution is allowed to stagnate in the trough channel and water fails to exit the tube probably due to chamber clogging as a result of high root density, bacteria may grow and cause damage to cultivated plants. This can be avoided by maintaining proper tilt that is sufficient to allow for solution to pass through entirely. 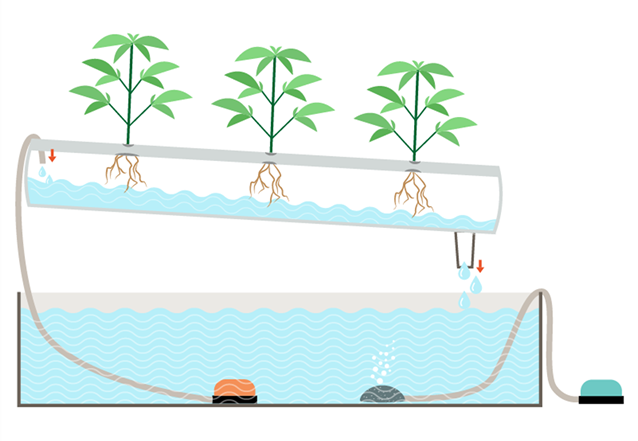 This is a hydroponics system where plants are propagated in bed, bag or pot with suitable planting medium. Planting media used in this type of system include: organic (straw, bark, seaweed, sawdust and peat), mineral (sand, gravel, perlite, ceramic balls, red/black cinder and rock wool) and synthetic (expanded clay ball; polystyrene, polyurethane). On this system, plant nutrients are supplied using varying means such as micro-irrigation or sub-irrigation within troughs, or periodic flooding and draining (“ebb and flow”). The periodic draining of the bed maximizes plant root exposure to both air and nutrients and favours the conversion of ammonia to nitrate. The media beds also serves as biofilters in aquaculture system. Ebb and flow can be controlled by a siphon valve or a timer. Plant nutrients are usually supplied from using controlled siphon valve or a timer which automates nutrient dosing to the system in order to maintain nutrients at optimal concentrations for plant growth. Nutrients can be managed within closed or open (flow-through) systems. Flow-through systems make the management of nutrients easier but raise concerns over water use and pollution. 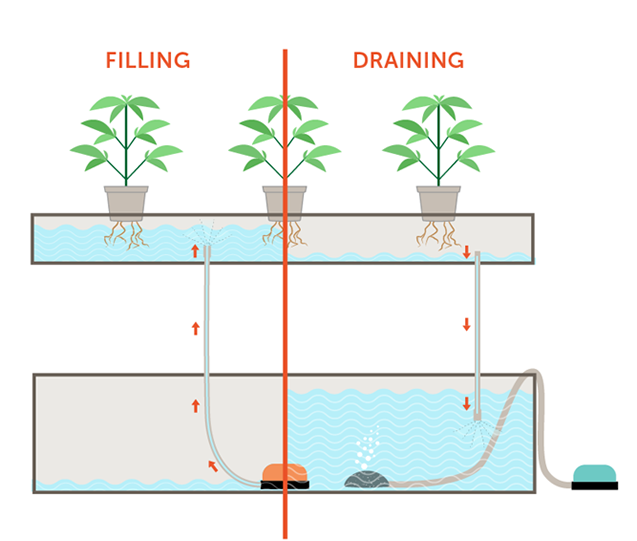 A drip system is one of the most commonly used hydroponic systems for large scale cultivation of plants and is very adaptable to different planting medium. Individual drippers are placed around cultivated plants in their growing medium and equal amount of aerated plant nutrient solution is supplied. Excess unabsorbed nutrient solution by the plants drains back into solution collection tank where it is pumped back through the dripper system as required.

Harvesting is much easier in this system in that plants will just be collected from the growing medium immediately the drippers are removed. This system is also highly used in research works in that the dripper systems can be customized to deliver nutrient solution to different plants at different regulated intervals and watering schedule frequencies can also be regulated. 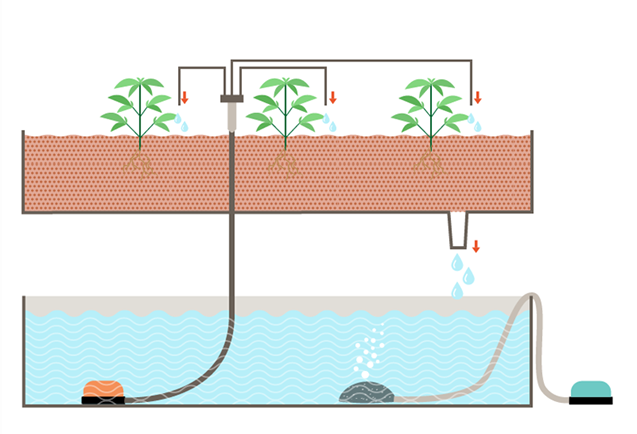 Aeroponics is a very unique hydroponic system whereby well aerated nutrient solutions are sprayed in form of fine mist on the root system of plants in the root chamber from nutrient tanks using pump. The use of aeroponics give the greatest advantage of exposing the plant root the highest percentage of oxygen unlike soaking the entire plant root in nutrient solution in other systems.

Aeroponic systems are more capital intensive when compared with other systems, but they’re also highly effective for large-scale crops and vegetable production because vertical growth is made successful thereby maximizing available space for growing. 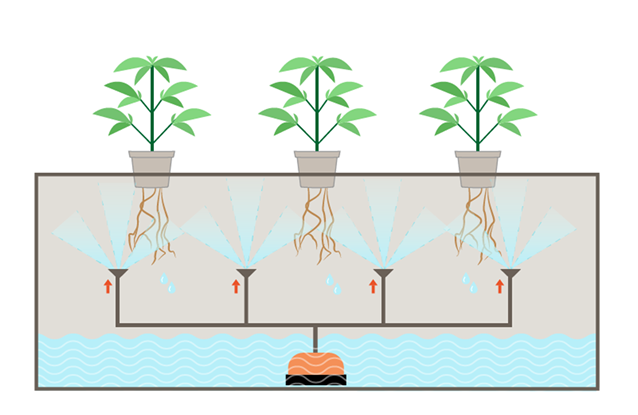 The wick hydroponic system is the most rudimentary system of hydroponics. Just like the floating raft, a wick hydroponics will use material such as piece of rope through a PVC tube or solution trough. Well aerated nutrient solution is absorbed by the rope and taken to the propagating medium in the tray or trough. The beauty of this system is that there is no need for pump and means of powering it. Also, the issue of mechanical breakdown of pumping machine is avoided. 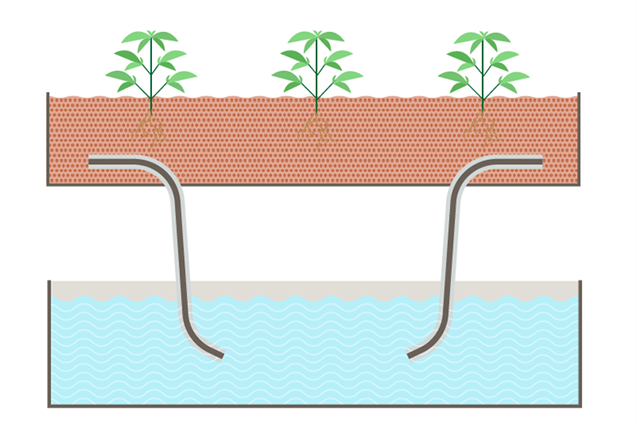