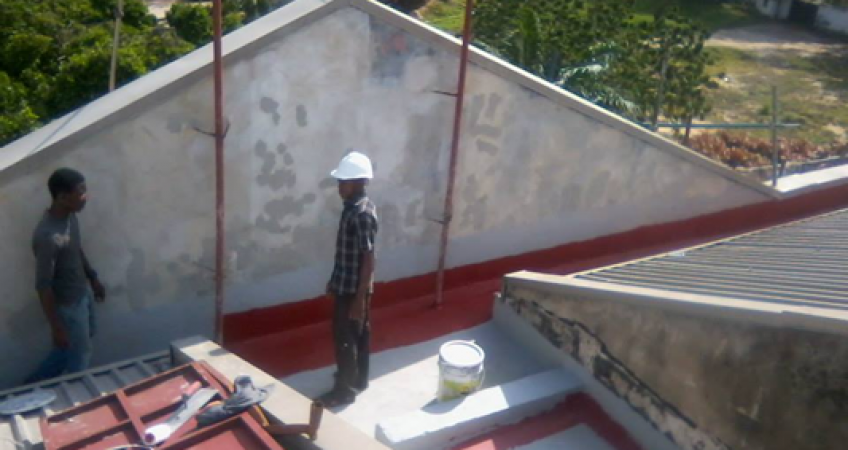 Posted by hudsonbay In Blog

Abrasion damage – Surface deterioration caused by rubbing and friction against the surface.
Abrasive – Any hard, strong substance, such as rocks, sand, water, or minerals, that will cut, scour, pit, erode, or polish another substance.
Abrasive Blasting – A process for roughening, cleaning, or finishing a surface by propelling an abrasive medium at high velocity against it; commonly used methods include sandblasting, shot blasting, and high-pressure water blasting.
Accelerated Aging – Deteriorating a material at a faster-than-normal rate by subjecting the material to specified accelerated test conditions.
Accelerator – (1) A substance which, when added to a cementitious material, increases the rate of hydration of the hydraulic cement, shortens the time of setting, or increases the rate of hardening, strength development, or both; (2) any substance which increases the rate of a chemical reaction.
Acceptance Test – a test conducted to determine whether an individual lot of materials conforms to specifications or to determine the degree of uniformity of the material, or both.
Acid Etching – Application of acid to clean or alter a concrete surface; typically used only when no alternative means of surface preparation can be used.
Acoustic Emission- Sounds, both audible and subaudible, that are generated when a material undergoes irreversible changes, such as cracking in concrete; provides the basis for a nondestructive monitoring technique.
Acoustic Impact —a method used to detect the presence of delaminations or subsurface voids in concrete based on the sounds made by the concrete upon impact. (See also chain drag and sounding.)
Acrylic Resin —one of a group of thermoplastic resins formed by polymerization of the esters or amides in acrylic d; used in concrete maintenance and repair as a surface sealer or bonding agent.
Activator – A material that actuates a catalyst.
Active cracks – Those cracks for which the mechanism causing the cracking is still at work; any crack that is still moving.
Adhesion – The bonding of two surfaces through interfal effects such as molecular (valence) forces or interlocking action, or both.
Adhesive failure – A rupture of an adhesive bond such that the separation appears to be between the adhesive and one or both of the adherends. (See also cohesive failure.)
Adhesives – The group of materials used to cause similar or dissimilar materials to cohere.
Admixture – A material other than water, aggregates, hydraulic cement, or fiber reinforcement, added to concrete, mortar, or grout, during batching or mixing to enhance plastic or hardened material properties, or both
Top
DFI – SPR – A not – for – profit Knowledge Centre
CONCRETE REPAIR TERMINOLOGY
Advancing-slope grouting – A grout injection technique that causes the leading edge of a mass of grout to move horizontally through preplaced aggregate.
Age hardening – The progressive change in the chemical and physical properties of an adhesive leading to embrittlement. (see also aging.)
Aggregate – Granular materials, such as sand, gravel, and crushed stone, commonly used in concrete, mortar, or grout.
Aggregate, reactive – aggregate containing substances capable of reacting with the alkalies in portland cement; products of the reaction may cause abnormal expansion and cracking of concrete or mortar under certain service conditions.
Aging – The cumulative effects of time on the properties of materials or substances.
Agitation – The mixing and homogenization of slurries or finely ground powders by either mechanical means or injection of air.
Agitator – A device for maintaining plasticity and preventing segregation of mixed grout, mortar, or concrete by shaking or stirring.
Agitator tank – A vertical, open-top tank equipped with rotation blades used to prevent segregation of mixed grout.
Air-entraining admixture —a material that creates microscopic air bubbles in concrete, mortar, or cement paste during mixing; used to increase the workability and frost resistance of the mixture.
Air content—the volume of air voids in cement paste, mortar, or concrete, exclusive of pore space in aggregate particles, usually expressed as a percentage of total volume of the paste, mortar, or concrete.
Air entrainment —the deliberate addition of microscopic air bubbles (generally smaller than 1 mm) to concrete or mortar during the mixing. (See also air-entraining admixture.)
Air ring—perforated manifold in nozzle of wet-mix shotcrete equipment through which high pressure air is introduced into the material flow.
Air-water jet—a high-velocity jet of air and water mixed at the nozzle, used to clean surfaces or remove deteriorated concrete; water sprayed at pressures less than 5,000 psi (35 MPa) will remove dirt and loose, friable material; water sprayed at pressures between 5,000 and 45,000 psi (35 – 300 MPa) will remove heavy encrustations of dirt and loose, friable material, including deteriorated concrete.
Alignment wire – See ground wire.
Alkali – Salts of alkali metals, specifically sodium and potassium, occurring in constituents of concrete and mortar; usually expressed in chemical analyses as the oxides Na20 and K20.
Alkali-aggregate reaction – A chemical reaction between alkalies (sodium and potassium) from portland cement or other sources and certain constituents of some aggregates that can cause abnormal expansion and cracking of concrete or mortar under certain service conditions.